Some office spaces require divisions for a number of reasons. This office required some segregation due to the type of work carried out and the noise levels involved. Hard surfaces in the large open area were creating echo and further noise disruption. The metal roof along with plastered and glass walls and concrete floor created an office environment which would have not been usable for the purpose it was designed for.

SoundHush provided an acoustic design solution by creating and allowing suspended rafts in circles from the ceiling to allow Class A sound absorption to this area. The design was clearly thought of to make sure aesthetics was considered as paramount along with acoustics. The client decided to make the ceiling vibrant by allowing various colours for each acoustic raft. This really did have an impressive visual effect along with correcting the acoustics within the open plan area. 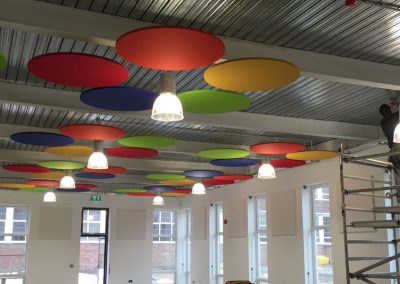